US companies pay visit to Uzbekistan

Tashkent, Uzbekistan (UzDaily.com) -- Over 30 representatives from 13 major American companies interested in trade and investment in Uzbekistan visited Tashkent last week for discussions with the Government of Uzbekistan and meetings with business contacts, including numerous local companies and members of the American Chamber of Commerce in Uzbekistan (AmCham).

On 24 March, Ambassador Spratlen delivered a keynote address at a widely attended U.S.-Uzbek government-business roundtable. The visit was co-organized by the AmCham, the Government of Uzbekistan, the U.S. Embassy, the U.S. Department of Commerce, and the American-Uzbekistan Chamber of Commerce.

During the two days prior to the roundtable, the Department of Commerce brought a seven-company trade mission to Uzbekistan to conduct research on the business climate. During the roundtable, Uzbek government officials provided overviews of Uzbekistan’s economic performance and priorities. They also offered sector-specific information geared at possible cooperation with American firms in the areas of pharmaceuticals and healthcare technology, which were a special focus of the roundtable. In turn, visiting and locally based business posed questions about doing business in Uzbekistan during the event’s open forum.

The exchange of information continued during a business-to-business session, during which visiting businesspeople held discussions with Uzbek companies and government officials. Many visiting businesses also participated in separate one-on-one meetings with representatives from Uzbek ministries and state-affiliated companies prior to the roundtable itself.

Participants remarked that the roundtable and other activities provided them with crucial insight into Uzbekistan’s business environment and valuable opportunities to network with government and corporate decision-makers. Some companies expressed optimism that their participation in the week’s events could lead to concrete. 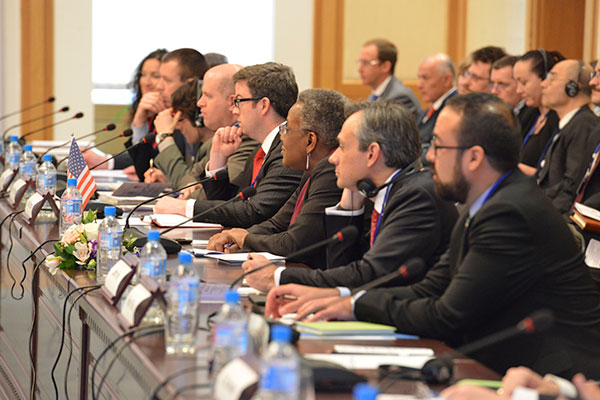 Tashkent, Uzbekistan (UzDaily.com) -- On 12 April, President of Uzbekistan Shavkat Mirziyoyev got acquainted with the presentation of investment projects that will be implemented in the city of Tashkent.

Tashkent, Uzbekistan (UzDaily.com) -- On 10 April 2021, a delegation of the Republic of Uzbekistan headed by Minister of Foreign Affairs Abdulaziz Kamilov, who arrived in Doha on a working visit, met with the head of the political office of the Taliban Movement in Qatar, Mullah Barodar Akhund.