First Deputy Chairperson of Uzbekiston Temir Yollari Davron Dehkanov told to Sputnik agency said that the delegation of Talgo (Spain) will arrive in Uzbekistan to participate in International Investment Forum, which will be held in Tashkent on 5-6 November.

Within the forum, Uzbekiston Temir Yollari and Talgo are planning to sign the contract for supply of the trains.

Dehkanov refused to announce the cost or technical characteristics of the trains, citing commercial secret. He said that the trains will be produced in line with the requirements of the Uzbek side.

Uzbekiston Temir Yollari and Patentes Talgo, S.L. signed a memorandum of cooperation in sphere of high speed railway transportation in March 2015. The Uzbek side, at that time, stated that it is ready to buy two high speed trains with increased capacity. It is planned to add two more cars to the train.

New trains will be used at the high-speed route Tashkent-Bukhara, which will be launched in September 2016. The project cost on production of railway rail from Samarkand to Bukhara estimated at over US$400 million.

Implementation of the project allows to cut travel time for transportation of passengers and cargoes, decreasing exploitation expenses by over 30%.

Estimated cost of two new trains can make up about 38 million euros. 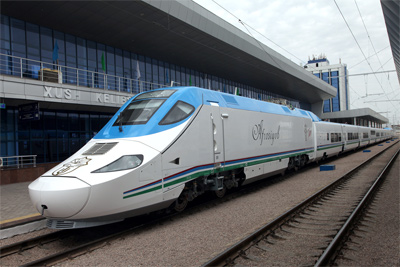