LUKOIL directs US$759m into exploration and mining in Uzbekistan

According to the Russian company, the volume capital expenses for exploration and mining in Uzbekistan grew from US$549 million in January-September 2014 to US$759 million in the same period of 2015. The growth rate made up 38.25%.

In the third quarter of 2015, the investments of the Russian company into Uzbekistan made up US$263 million against US$248 million in the same period of 2014.

According to LUKOIL, the company increase gas extraction in Uzbekistan by 24.8% year-on-year in the first half of 2015 – to 78,400 barrels of oil equivalent.

The company will produce about 17-18 billion cubic meters of gas a year in Uzbekistan by 2020. 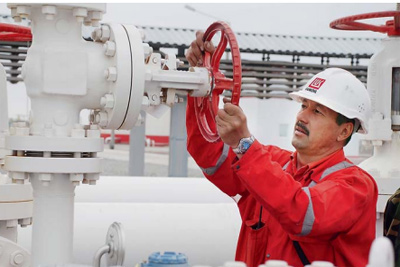 Тashkent, Uzbekistan (UzDaily.com) -- On 21 September, at the headquarters of the United Nations in New York, within the framework of the 76th session of the UN General Assembly, a general political debate began, in which the President of the Republic of Uzbekistan Shavkat Mirziyoyev made a video message.

Tashkent, Uzbekistan (UzDaily.com) -- On 17 September 2021, A grand opening of the production line of UzAuto Motors JSC and SamAvto JV LLC took place in the city of Hajigabul (Azerbaijan). In addition, within the framework of an alliance with General Motors, UzAuto Motors announced the start of sales of Chevrolet cars in Azerbaijan.

Tashkent, Uzbekistan (UzDaily.com) -- Uztekstilprom Association, with the assistance of the Embassy of Ukraine in Tashkent, hosted negotiations with a business delegation from the industrial city of Khmelnitsky (Ukraine), headed by a representative of the local Administration, as well as among the heads of textile companies in the city. The meeting was also attended by representatives of domestic textile companies interested in establishing close partnerships with potential partners from Ukraine.