Large investment projects that are planned to be commissioned by commercial banks in 2021 were presented.

Systemic work is being carried out in Uzbekistan on the production of export-oriented and import-substituting products with the involvement of modern technologies. In particular, in 2021, commercial banks are scheduled to finance large investment projects worth 120 trillion soums.

14 major investment projects worth about US$1 billion have been developed in the production of construction materials, textile products, agriculture, petrochemical industry, mechanical engineering and other areas.

In general, within the framework of the projects, it is planned to organize the production of special equipment, polymetallic products, geosynthetics, building boards based on mineral wool pipes, glass and other building materials, to organize fruit and vegetable clusters and small industrial zones.

The Head of the state gave instructions on taking into account the socio-economic potential of the regions in the implementation of projects, improving industrial infrastructure, creating clusters and technology parks.

President Shavkat Mirziyoyev was also informed about the implementation of investment projects in Tashkent city. It was noted that according to the program of socio-economic development of Tashkent in 2020, US$3.7 billion was spent from all sources of financing. 306 projects worth more than 11 trillion soums were implemented, and about 13 thousand people were employed.

1,277 investment projects worth more than 109 trillion soums were formed in continuation of activities in this direction for 2021-2023. It is expected that almost US$4.9 billion of this amount will be foreign investment and loans. The implementation of these projects will create about 86 thousand jobs.

This year, US$4.1 billion will be invested in these projects from all sources. It is planned to launch 454 projects and employ about 29 thousand people.

The Head of the state gave instructions on timely and high-quality implementation of the submitted projects under modern requirements. 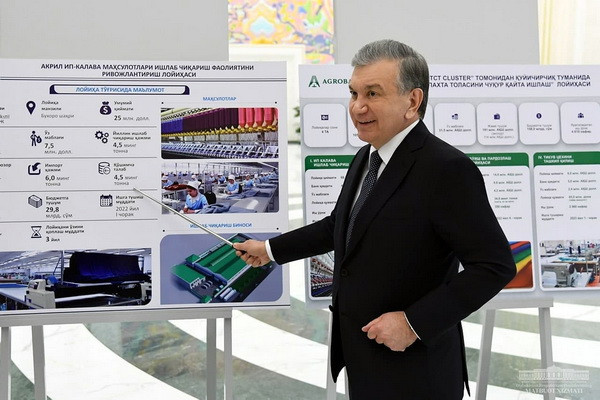 Tashkent, Uzbekistan (UzDaily.com) -- In January-December 2020, Uzbekistan’s foreign trade turnover (FTT) reached US$36.3 billion, which, compared to the same period of 2019, decreased by US$5.45 billion (a decrease by 13.1%), the State Statistics Committee of Uzbekistan said in a report.

Tashkent, Uzbekistan (UzDaily.com) -- According to the order of the Chairman of the Board of JSC Uzbekneftegaz, Mehriddin Abdullayev, Bobonazar Jumaev was appointed head of the Commerce Department, who worked as the head of UNG ECONN JV LLC before being appointed. This was reported by the press service of Uzbekneftegaz.

Tashkent, Uzbekistan (UzDaily.com) -- In order to develop the tourism industry in the Republic of Uzbekistan, and create conditions for pilgrimage, separate conditions have been identified for airlines.