As you know, it was planned to reconstruct and expand the memorial complex of Imam Bukhari in Samarkand region. Earlier, during a trip to the region, the head of state pointed out the need for a comprehensively thought-out approach to the design of these works. Accordingly, the project was revised and improved. It provides for the construction of a large mosque, minarets and terraces, an alley, along it - hotels and other infrastructure.

Getting acquainted with the presentation, the President gave instructions on the quality construction of the complex in accordance with world standards, to create more conveniences for pilgrims and travelers.

The project of the new building of the State Museum of Arts of Uzbekistan was considered.

According to the project, developed by the world famous Japanese architect Tadao Ando, commissioned by the Art and Culture Development Foundation under the Ministry of Culture of our country, a new three-story circular structure is planned to be built next to the current building of the State Museum of Art.

The need to build a new building for the museum is due to the limited exhibition possibilities of the existing building - now only 3 percent of the exhibits can be presented. With the construction of a new facility, the possibilities and area of the museum will expand significantly.

The project for the reconstruction of the museum, reflecting modern trends and solutions of socially oriented architecture, will preserve the historical value and integrity of the object, will become a decoration of the capital.

On 16 October, during a visit to the new building of the Tashkent Architecture and Construction Institute, the head of state noted that it was necessary to create a specialized cluster here and turn this area into an array of builders. For this purpose, the territory of the institute was enlarged, a new project was developed.

So, next to the university it is planned to build a construction college, a research center for building materials, a laboratory, dormitories, a sports complex and other facilities.

In recent years, the scale of creative work in the country has expanded significantly. In particular, multi-apartment buildings are being built to meet the growing demand of the population for housing.

A number of projects in this direction are planned to be implemented in Surkhandarya region, which were presented today to President Shavkat Mirziyoyev. Thus, it is planned to carry out the reconstruction and improvement of the central Beruni street in the city of Termez, where the International Research Center of Imam Termizi, a mosque, a hotel, houses, a mahalla guzar and many enterprises are located. And in the makhallas of Nurli Manzil and Lochin, Denau district, energy-efficient apartment buildings and social facilities will be built.

During the presentation, information about construction projects in the city of Tashkent was also provided.

As you know, on 12 June 2020, the head of state visited Almazar district of the capital and set tasks for its social and economic development. In particular, it was proposed to transfer part of the Tashkent region to Almazar district and build new residential areas and enterprises.

According to the project presented today, it is planned to build multi-storey buildings for more than 150 thousand people, a school, a kindergarten, a park and a commercial zone on an area of more than 200 hectares.

Another project is dedicated to the effective use of Navruz reception house. It is planned to carry out a major overhaul of the complex and organize in it a Center for Rehabilitation of Enterprises with State Participation and the Privatization of State Assets. Relevant information for entrepreneurs will be presented here openly and transparently.

President Shavkat Mirziyoyev also got acquainted with the presentation on the construction of the Temurbeklar Maktabi school in Tashkent and gave the necessary instructions. 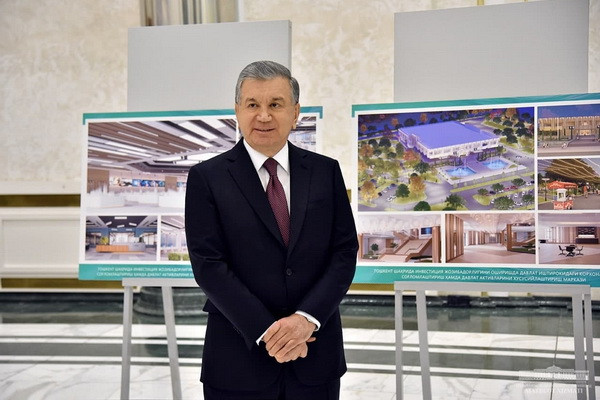 Tasks to increase the availability of financial services were discussed

Tashkent, Uzbekistan (UzDaily.com) -- On 27 July, the Central Bank of Uzbekistan held a training seminar on the ZOOM platform in order to highlight the essence and significance of the "national strategy for increasing the availability of financial services for 2021-2023."

Projects for the construction of a number of facilities considered

Tashkent, Uzbekistan (UzDaily.com) - On 26 July, President Shavkat Mirziyoyev got acquainted with the presentation of projects for the construction of cultural, medical, trade and service facilities.